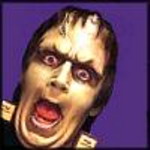 A lot of people have asked about the avatar I use for my Twitter profile so I thought it would be easier just to point them here.

Back in 1994 I was working for Midwest Micro, a local company that was competing with Gateway. I worked in the advertising department where I was a manager.

We advertised in many of the Ziff Davis publications, Computer World, PC Computing and Computer Shopper and the creative director planned these elaborate multi page spreads that appeared in these publications. Most were 4 to 10 pages, full color, always with a theme.

Well October was drawing near and the boss wanted to advertise ‘monster savings’ so he planned this Halloween spread, he also asked if I wanted to be part of it. I said sure, even though it meant shaving off the moustache I had sported for years, I thought it would be fun.

The result is in the avatar. I spent a few hours in makeup and had a huge hose clamp around my neck that had Pentium computer chips attached to it. My picture took up most of the page on page two of the spread and appeared in a couple million magazines.

So, I joke, but yes, that was the extent of my modeling career. If you ever stop by the house, I still have the October 1994 PC Computing if you want to see. :)

7 thoughts on “The Rise and Fall of a Modeling Career”