My kids amaze me. Their wit, their compassion, their humor, their awareness… sometimes especially that last one.

Remember being a kid? That is mostly directed at those 1960’s children whom I consider my peers. What is your earliest ‘worldy event’ memory? I don’t remember anything about Viet Nam, I think I was sheltered from all that. The first thing I can recall that was ‘big news’ was Watergate when I was in sixth grade, so that made me what, 11, 12ish? I also recall predicting the winner of the Frazier/Clay (before he became Ali) fight when I was in fourth grade. Mrs Smith let us ‘bet’ on the fight and I got out of doing homework, but even then I was like 9.

A few nights ago my daughter, you know the six year old (I said six) and I were doing her homework. It was kind of a math thing where she had to count up from the year she was born and draw a picture of something for each year. She was having a hard time so I was feeding her ideas; 1999, her first Christmas, 2000, her first birthday and so on. We got to 2001 and I suggested our trip to Ireland and she said ‘oh yeah’ or something along those lines. She was about 2 and a half when we went and we got back late on September 10th, 2001, but I digress. Anyway, I fed her more ideas for the other years and she went into the other room to draw the pictures.

A few minutes later she said “Dad, I have a better idea for 2001, even more important than our Ireland trip.” I said OK, thinking that she was too young to put any of this together and 9/11 isn’t in the news much anymore, hasn’t been for a while, so she must be thinking about something else. I mean she was 2, and now she is only 6. When I was 6 the most important thing was finding money to buy a banana popsicle from the ice cream truck, know what I mean?

So anyway, a few minutes after she had said she had a different idea, she came back to show me what she had drawn. 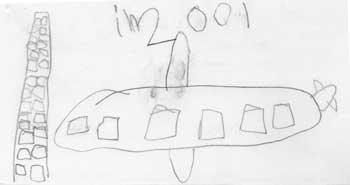 Which brings me back to the subject of this post. I think my kids are growing up too fast, way too fast.